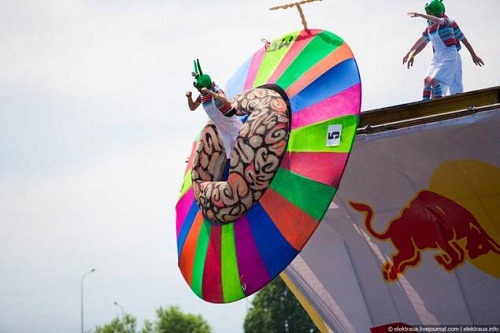 SAN FRANCISCO–The 10th annual Red Bull Flugtag took place this Saturday at McCovey Cove.  The Red Bull Flugtag, which means “flying day” in German, has competitors build and pilot contraptions that they will attempt to fly off a 30-foot high ramp.  All of these machines must be human-powered, so many of the flights ended up as nothing more than controlled falls.

The event attracted around 116,000 spectators and 32 teams.  Teams were judged primarily on the distance they could reach before plummeting into the water.  The winning team Mustachiod Men of Team Movember flew an aircraft designed after a mustache in order to raise awareness of men’s health a distance of 54 feet.  For winning the event, the team will be able to skydive with the Red Bull Air Force.

Sugar Skull 138, who finished second, included 2 San Francisco Firefighters and will be able to sail on the America’s Cup competitors Oracle Team USA’s chase boat.  The 3rd place team Skyjackers, received an invitation to participate in indoor skydiving with a member of Red Bull Air Force.  Californauts, who won the People’s Choice poll flew a machine that’s wings resembled the shape of the state of California.

Judging the event was America’s Cup competitor Jimmy Spithill (who also participated in the event with the aircraft Spirit of 17), DJ Menace of Live 105, “The Bachelor” star Ben Flajnik, musician Sheila E and Olympian Alysia Montaño

The event, which originated in San Francisco in 2002, has now spread to many of the major US Cities including Chicago, Miami, Portland, and New York.