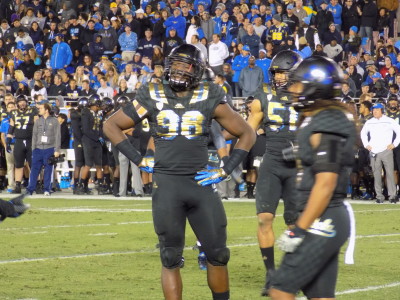 PASADENA—For the third year in a row, UCLA lost it’s home finale at the Rose Bowl. This time it was to the Washington State Cougars, 31-27, behind WSU Quarterback Luke Falk, the Cougars marched 75 yards in just 66 seconds. The Rose Bowl crowd was stunned, as a victory appeared imminent with just over one minute left. They showed grit, and made many timely stops on defense but they could not stop one of the best QB’s in the nation on this chilly November night.

The prior possession, the Rose Bowl was on fire as UCLA Quarterback Josh Rosen darted 37 yards on a broken play and dove into the end zone to give the Bruin Nation a reason to roar and seemed to give them the victory with 1:09 left in the game. Rosen would then throw a beautiful lob pass to his go to guy Thomas Duarte in the South East endzone for the two-point conversion and a 27-24 lead. But the night would belong to Luke Falk, the WSU Quarterback, who would give the Bruins fits all night.

He was knocked out of the game with a vicious hit by Jacob Tuioti-Mariner in the first half. He shook off the injury, would return and give a effort that would ultimately lead to victory. The final drive of the night would be the culmination as with only three seconds left in the game he would find Marks on a play that would be called defensive pass interference as the pass was completed for a touchdown. Falk said postgame that, “I’ve always dreamed of having a game winning drive at the Rose Bowl.” ‘

His dream came true, while it was a nightmare for Bruin fans. Attendance was great, thanks for coming out and supporting the team. The loud, boiusterous crowd was a big reason that UCLA was in a position to win this game at the end. 76,255 showed up for this game that was a late start of 7:45, it was also being telecast nationally on the ESPN network.

Jordan Peyton had a spectacular game, 14 receptions, 130 yards for the steady WR who seems to quietly play great week after week. This broke a UCLA record for receptions in a single game. In addition, Kenny Clark recorded three sacks for the Bruins, and amazingly the Bruins still control their own destiny in the very competetive PAC-12 south. They travel to face the always tough Utah Utes, and then the cross town rivalry ends the regular season on November 28th, when they face the USC Trojans at the Colisuem.

Is This The Season the 49ers Win The Super Bowl?