BEL AIR—Becoming deaf as a teenager who adored music wasn’t easy…I think I would have accepted blindness if given a choice. Surely, my ears were my biggest gift of life but there was one person who seemed to suffer more than me… my mother.

The first year was about seeing specialists, taking tests and getting opinions… 2nd… 3rd…4th…12th from basically anyone that knew anything about head injuries or hearing and an MD on their door.

Some of the tests were horrendous… especially the one where they lay you on a table then they put little water balloons in your ears and they change the temperature of the water… it literally makes you feel like your spinning and they only stop it when you’re puking.

I often wondered why my parents kept sending me to new doctors, who just seemed more concerned with running up bills retesting me than to really make me hear again. I felt like a reject of sorts… disappointment of not being able to know how to heal myself.

Amid all those doctor visits, we learned that one must go through the five stages of grief, learning to deal with a death… or deafness in my situation. Sometimes I wondered if it would have been easier for my mother to cope if I had just died.

As I was juggling these stages of self-acceptance…. my mother was so obviously stuck in denial. Having handicapped children was not in her picture of a perfect life. She was Super-mum, she could do everything… except fix her child’s hearing.

One day I was studying with my feet upon the foot-board of my bed. My mother came in lecturing me about something I had done wrong and she was going on and on. As a new lip reader, I understood maybe 2 out 10 words but I always knew what she wanted.

She kept saying, “Do you understand me?” 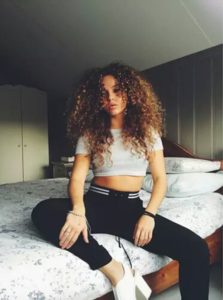 I replied in my typical bratty tone, “Yes please stop shouting… I still can’t hear you.”

The look on her face was pure excitement. I was left confused as to why my cheeky reply suddenly made her happy.

By dinner time, she basically told everyone how I could hear her shout!

At first, I didn’t fight it. I let her have her enjoyment as I didn’t want to burst her bubble. After all the hidden sadness, around “hearing” in our house, we needed something to hold onto, some hope… even if it was not true and short-lived.

Long after the doctor testing ceased, my mother continued to do her own hearing tests on me. At random times she would shout and if I didn’t “hear” her, she’d ask, “Oh dear, why didn’t you hear me?” I’d think to myself, “Really?!?!” But it was allowing her a wee bit of hope.

At times, I found it to be embarrassing and degrading so I knew the “talk” had to happen. Maybe it wasn’t cool that I waited so long because this whole time she had been set on that I could hear her certain tone of voice and that made her hopeful.

I approached it gently, “When you speak, things vibrate and I feel your voice.” Her confused gaze was breaking my heart. I took her up to my room and had her place her hand on the footboard while I played music. As gently as possible I said, “I can’t hear you but I’m not dumb, I know you were shouting.”

She argued, “No, you heard me. I know you did!”… but I didn’t. It was such a disappointment for her. If only she could fix me… but she couldn’t. It wasn’t her fault. She didn’t fail me as a mother. It just was.

I was coping. I was learning how to find new ways of perceiving sound. The less I tried the more naturally it came to me. Things like feeling music started to have its own joy again. Still, It was painful to accept my own loss than to have to help others accept it as well.

The next few years would include procedures, surgeries, therapies, devices and even a trip to the Starkey Hearing Aid Foundation in Eden Prairie, Minnesota. The amazing owners, Bill and Tani Austin treated me like family and offered me everything available in technology.

I was chauffeured around by one of the Osmonds’ nephew and was taken to parties to celebrate how I can now “hear again.” I sat beside Lou Ferrigno. He was in all the newspapers, on how the original “Incredible Hulk” went from deaf to hearing, as he got the same technology to use as a new police officer.

Mr. Austin is the best of the best and he personally examined and fitted me with all sorts of new technology. I came home with all these devices and new sounds that made us all temporarily happy. The sounds were not like how I could hear before. It was different. It was headache-causing. It wasn’t natural and it felt painful.

But I was doing this for my loved ones so they could feel better about me.

The less I fought it, the more I found peace, answers and alternate ways of understanding sound. Your senses become so much more magical when you only have four.

I love to go barefoot. Everything can be felt through my feet. Having shoes on is like using ear plugs.

I had more sensitivity. Things I wouldn’t have noticed before became noticeable. In fact, there were times I was rooms away and knew someone was at the door but no one heard them knocking.

My vision was no longer one dimensional. My peripheral vision effortlessly became a major tool. I can often predict when and what someone is going to say.

Changes in someone’s body language became more noticeable. Automatically, I anticipate sounds and thoughts. For me, this happens in defense of offending an unsuspecting hearing person.

I pick up on “1-second look” clues. This is when a person has a quick passing facial expression but it means something much more. Like you can almost hear them thinking.

I notice other people’s reactions to find the basis of noise, going off random cues as well as the vibrations I feel. Once you find the source of the noise you can figure out what it means.

For example, a person in a restaurant shouting. How do I know he’s shouting? Because people tables away are looking in his direction. So he’s’ obviously not whispering. I follow where the eyes are going and see a man upset and he’s pointing at his food and then you lip read some and I get it… he’s upset, he’s shouting and it’s a dispute.

One doesn’t have to be hearing to know this. This is how you learn to be deaf and get through in a hearing world.

I know the volume level of a club or restaurant by the expression of people’s faces and how hard or easy it is for them to communicate, continuously leaning forward and talking with more force than if it was a quiet place. You feel the music on your chair or through your glass. You know the vibrations are coming through strong so that means hearing people hear it loud and their communication is affected by the noise levels.

Before I lost my hearing, I routinely ran 6 miles a day, never noticing as much as I did running the same streets while deaf. For example, in some neighborhoods, I began to know when they were doing laundry because I could smell it from the street. I often could tell what people were having for breakfast.

I’d deal with constant interrogations: Why are you playing music? Why are you going to concerts? How did you know I was talking? Somehow people just assume if you can’t hear through your ears you’re dumb and you can’t “hear” at all. You do, it’s just you hear in a different way.

I quickly became tired of explaining this to everyone, my issue of deafness is my obstacle and not theirs. I don’t like being judged by my deafness. Sometimes, I’m with deaf friends and they hear something I didn’t notice and I ask them how did you know of that noise and they usually blow me off. I get it… they’re tired of explaining their deaf-hearing tactics but I always wonder how I can improve my ability to “hear”.

It’s that rare hearing person that enters my life that makes me their charity case, wanting so badly for me to be normal that they find every way to make me “hear” which brings back the aching memories of my mother.

As methodical as the 5 stages of grief, I can usually spot it as it happens. I’m flattered and sometimes get caught up with their idealism which always turns into disappointment.

First, they want to fix how I “hear” by finding a solution: some want me to sign, some will explore every potential assistive device, surgery, new technology, some suggest I don’t sign and just lipread.

After that, they want to fix the way I “talk.” When I was speaking, some will constantly correct my speech and suggest going to a speech therapist… some are so bold to believe they can be my speech therapist. Some believe I shouldn’t speak at all. Now that I don’t use my voice, it’s suggested that I should speak.

When all that doesn’t work, they imagine I can hear them on some level. Same as my mother. If I let them think I can hear them, they are more excited, more relieved, but why would I carry on a lie with someone I care about.

When all this fails, they lose the spark of love and interest in my wellbeing. It’s as if they feel they failed me on some level or maybe it’s just that I failed them. It’s like a bird with a broken wing… how hard do you try to fix it before you just give up and let it die.

When we reach this stage, it’s bittersweet. It usually doesn’t come quickly. I feel their disappointment and how I failed them but I am the one left with the result. All the energy going into trying to make me normal again just exhausts me and destabilizes me.

I have a new bataal teacher in my life and it just occurred to me that he is one of these people. I am saddened because it is someone I feel so comfortable with but it’s better to get unattached before its too late. It never ends well.

I never put my theory into words before… it was only tonight when I was sitting with him as he was certain I could hear him laugh. I realized we are in this cycle. He has done everything to find new ways of me hearing music, such as a vibrating metronome, he’s learned ASL, he’s urging me to speak and he wants to change everything I have been living with for more than a decade for a “better life.”

All the while, I’ve blindly fallen impressed by his undying attempts that I got swept in the hopes. I didn’t even realize until today I was caught up in this cycle; encouraging and believing that I could be fixed.

I’m all grown up now and learned to not allow deafness to define me. Sure sometimes I ask God… “Why do you take the ears of a person that lives for music and let people who don’t even know who My Chemical Romance is to have perfect hearing?”

But it’s my fate… and I accept it. I find myself avoiding people that make me their charity case. I guess it’s because I know that in the end… I’ll only disappoint them.