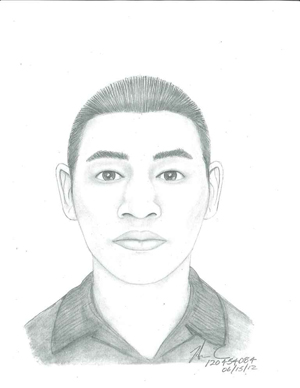 SAN FRANCISCO —Police have released a composite sketch of a suspect wanted for a June 2012 homicide in the Mission District and are seeking the public’s help in solving it.

On June 8 around 11:35pm, police arrived at 16th and Guerrero Streets to find 24-year-old Lorenzo Jimenez of Sacramento lying in the roadway suffering from a gunshot wound. Jimenez was transported to San Francisco General Hospital with life-threatening injuries but succumbed to his injuries the following day.

According to a San Francisco Police news release, an investigation conducted by police revealed Jimenez was with several friends in a bar near the scene of the shooting where he was confronted by 5-10 Hispanic men.   Upon leaving the bar, the men beat Jimenez in an unprovoked attack before one of the attackers shot him.

The composite sketch, which was produced by police based on witness interviews, describes the shooting suspect as a Hispanic male in his 20s, 5’6”-5’9” and his hair pulled back in a bun.   He reportedly fled the scene of the crime wearing a blue Golden State Warriors jacket.

As the investigation of the case continues, police believe there are witnesses or people with information about the suspect depicted in the sketch.   They are being asked to come forward and contact the Homicide Detail at (415) 553-1145.   Those wishing to remain anonymous may contact the Anonymous Tip Line at (415) 575-4444 or text a tip to TIP 411 and begin the message with “SFPD.”